DOJ and SEC Update FCPA Resource Guide for 2020 – What’s New and What Does It Mean?

On July 3, 2020, the Department of Justice (“DOJ”) and Securities and Exchange Commission (“SEC”) updated their 2012 joint guidance on the Foreign Corrupt Practices Act (“FCPA”) in the SEC and DOJ’s FCPA Resource Guide (“Resource Guide”).1 The updated 2020 Resource Guide mainly incorporates updated guidance memoranda from both organizations issued since the last update, as well as the results of case law from recent FCPA-related decisions. While these updates and FCPA-related opinions have been available contemporaneously, the comprehensive updates to the Resource Guide provide compliance professionals with a great opportunity to ensure they are up to date with DOJ and SEC guidance and modify their own compliance programs as necessary. As in the previous edition, the Resource Guide remains somewhat nuanced and open to interpretation. Where necessary, compliance professionals and other practitioners should consult with experienced anti-corruption/anti-bribery attorneys to address any uncertainties in the applicability of the Resource Guide to their own operations. Key updates to the Resource Guide include the following.

2018 decision in United States v. Hoskins,5 which held that individuals may not be liable for conduct prohibited by the FCPA’s anti-bribery provisions unless they are agents, employees, officers, directors, or shareholders of a U.S. issuer or domestic concern, or if they act in furtherance of a bribery scheme while in the territory of the United States.  In other words, under Hoskins, if an individual who participates in conduct prohibited by the FCPA’s anti-bribery provisions does so solely in a foreign country, and if that individual is also completely unrelated to a U.S. issuer or domestic concern, he or she would not be liable for prohibited conduct. The updated Resource Guide includes the same language from the previous edition regarding the liability of unrelated foreign nationals:

The 2020 Resource Guide reflects the SEC and DOJ’s apparent view that Hoskins’ jurisdictional reach limitations apply only in the Second Circuit and notes that “at least one district court from another circuit has rejected the reasoning in Hoskins. . . .”7

Following the Supreme Court decisions in Kokesh v. SEC8 and SEC v. Liu,9 the Resource Guide has been updated to reiterate the SEC’s power to seek disgorgement as a remedy for FCPA violations. Disgorgement is sought not to punish or deter conduct, but to “return the perpetrator to the same position as before the crime, ensuring that the perpetrator does not profit from the misconduct.”10 The Resource Guide also notes that although disgorgement is a remedy separate and apart from those that seek punishment or deterrence under Kokesh, it is still subject to the same statute of limitations—five years under 28 U.S.C. § 2462.

FCPA due diligence has become more and more important ahead of mergers and acquisitions. Corporations have rightly been fearful of underlying anti-corruption/anti-bribery issues at acquired entities for fear of being punished for another entity’s transgressions once a merger is complete. The 2020 Resource Guide clarifies the DOJ and SEC’s view on successor liability, noting that the regulators “recognize the potential benefit of corporate mergers and acquisitions, particularly when the acquiring entity has a robust compliance program in place and implements the program as quickly as practicable at the merged or acquired entity.”13 Further, the regulators also note that fulsome pre-acquisition due diligence is not always possible and that they will instead focus on post-acquisition compliance efforts. The 2020 Resource Guide adds discussion of United States v. Alstom S.A.,14 noting that no successor liability was sought against General Electric for Alstom S.A.’s violations of the FCPA where the violations and the related government investigation occurred prior to the acquisition. The DOJ and SEC are strongly suggesting that acquiring entities can avoid FCPA liability where they perform good-faith-effort pre-merger due diligence, engage in post-acquisition compliance integration and are transparent in reporting any problems that are found later.

Incorporation of New Guidance and Programs

Finally, the 2020 Resource Guide also incorporates guidance from several DOJ and SEC memoranda and policy guidance documents issued since the last update, including the following.

Just over a month prior to the release of the 2020 Resource Guide, on June 1, 2020, the DOJ released an updated version of its guidance on developing and implementing effective corporate compliance programs.17 As noted in the 2020 Resource Guide, the memorandum is designed to assist prosecutors in “making informed decisions as to whether, and to what extent, the corporation’s compliance program was effective at the time of the offense, and is effective at the time of a charging decision or resolution, for purposes of determining the appropriate” charging and penalty decisions.18 In other words, the guide is used by prosecutors to determine the efforts of a corporation in strengthening its compliance program as a result of some failure by providing a benchmark of the best practices of effective corporate compliance programs.

The 2020 Resource Guide now references the November 2017 DOJ Corporate Enforcement Policy.19 The Policy is used to explain how the DOJ makes charging decisions, specifically with respect to declinations. The 2020 Resource Guide notes that, with respect to FCPA violations, “where a company voluntarily self-discloses misconduct, fully cooperates, and timely and appropriately remediates, there will be a presumption that DOJ will decline prosecution of the company absent aggravating circumstances.”20

Regulators all around the world have drastically stepped up their efforts to prosecute corrupt payments to government officials since 2012 when the first Resource Guide was published. Multiple regulators in multiple countries raise the potential concern that each regulator would be “piling on” by adding charges to a multinational corporation’s misconduct in each country where the corporation operated—punishing the same misconduct many times over. In 2018, the DOJ announced its position that prosecutors should “endeavor, as appropriate, to coordinate with and consider the amount of fines, penalties, and/or forfeiture paid to other federal, state, local, or foreign enforcement authorities that are seeking to resolve a case with a company for the same misconduct.”21 The policy, colloquially known as the “anti-piling on” policy, is described in the 2020 Resource Guide, along with specific examples where the DOJ and SEC have credited fines, penalties, forfeitures and disgorgement imposed by foreign governments when resolving the misconduct in the United States.

Overall, the changes to the 2020 Resource Guide are mostly reflective of the changes in FCPA enforcement since the 2012 Resource Guide was published. It incorporates changes in case law and policy and now stands, once again, as a comprehensive reference for FCPA-related issues. It remains the most detailed and authoritative guidance for FCPA practitioners. Similar comprehensive guidance is now being sought in a number of jurisdictions as multinational companies face multiple enforcement actions around the world. While this is yet to be provided, in an attempt to encourage companies to self-report, in August 2019 the U.K.’s Serious Fraud Office (“SFO”) issued a new section of its Operational Handbook, titled “Corporate Cooperation Guidance.”22 The guidance provides some procedural clarity. However, most international firms had already adopted those procedures. Unlike the U.S. guidance, there is no presumption that early self-reporting will lead to a declination, absent aggravating factors. Therefore, it is likely to have limited benefit for corporate entities. Issuing the guidance together with subsequent enforcement actions has still sent a clear message from the SFO that companies that uncover misconduct are expected to self-report at an early stage. France is also sending a similar message after the settlement with Airbus SE earlier this year. In June 2020, the French Ministry of Justice sent a memo to prosecutors detailing its plans to investigate and prosecute bribery, which are similar to those in the United States. With a more cohesive approach, and similar mechanisms for a corporate entity to settle bribery allegations (Deferred Prosecution Agreements in the U.S. and U.K. and a CJIP in France), it is likely there will be a greater degree of information sharing and collaboration among prosecutors in the future.

1   A Resource Guide to the U.S. Foreign Corrupt Practices Act, by the Criminal Division of the U.S. Department of Justice and the Enforcement Division of the U.S. Securities and Exchange Commission (updated Nov. 2, 2015), available at https://www.justice.gov/criminal-fraud/fcpa-guidance.

4   A Resource Guide to the U.S. Foreign Corrupt Practices Act, by the Criminal Division of the U.S. Department of Justice and the Enforcement Division of the U.S. Securities and Exchange Commission (updated July 3, 2020), available at https://www.justice.gov/criminal-fraud/fcpa-guidance.

17  See Evaluation of Corporate Compliance Programs, by the Criminal Division of the U.S. Department of Justice (updated June 1, 2020), available at https://www.justice.gov/criminal-fraud/page/file/937501/download.

19  See FCPA Corporate Enforcement Policy, by the Criminal Division of the U.S. Department of Justice (updated November 29, 2017), available at https://www.justice.gov/criminal-fraud/file/838416/download.

Cadwalader Advises Lenders in $3 Billion CMBS Refinancing of One Vanderbilt

A Guide to LIBOR Legislation

August Changes to Fund Distribution in the EEA 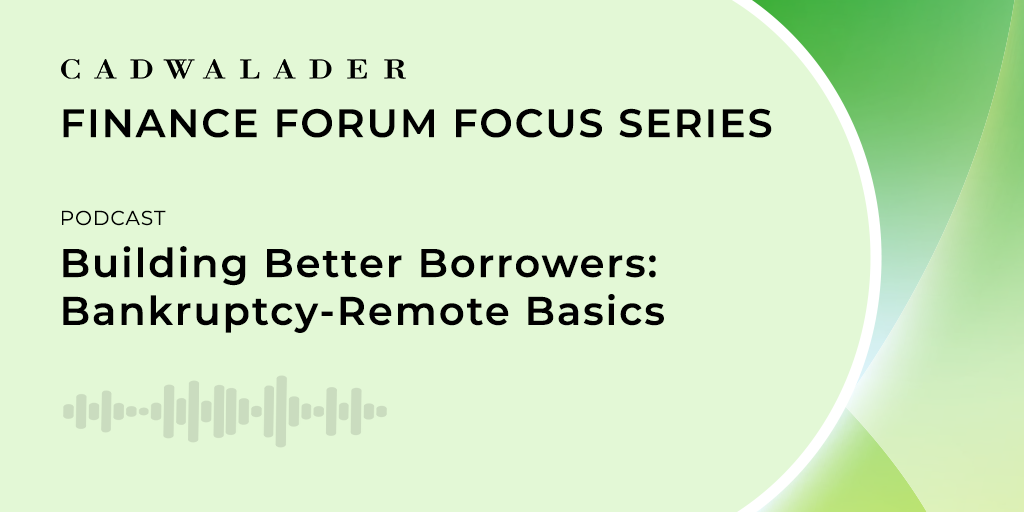